At the end of March, I successfully defended my PhD thesis titled ‘Two rhymed offices composed for the feast of the Visitation of the Blessed Virgin Mary: comparative study and critical edition’ (‘Dvě rýmovaná officia, složená pro svátek Navštívení Panny Marie: srovnávací studie a kritická edice’), and will receive doctorates from both Charles University, Prague and Bangor University, Wales.

My doctoral research focused on the feast of the Visitation of the Virgin Mary, and the offices written for it by Jan of Jenštejn [1347-1400], Exurgens autem Maria, and Adam Easton [1330-1397], Accedunt laudes virginis. The Visitation is the last biblical Marian feast introduced into the Roman Calendar – finally added by the papal bull Superni benignitas Conditoris on 9 November 1390 – and its institution involved multiple layers of examination, criticism, and discussion, the extent of which was particularly surprising to me. In a culmination of the process, Jenštejn’s and Easton’s offices were examined in 1390, along with six other offices, resulting in Easton’s being chosen for official promulgation throughout the Roman Church.

The political lives of Jenštejn and Easton had already been examined in some detail, as had Easton’s prose theological works. However, when I started to research this topic, I noticed that not only was the involvement of these two composers in the introduction of the new feast of the Visitation not well researched, but also that sources on this topic often presented conflicting accounts, especially regarding its institution. Some authors incorrectly identified Easton as the composer of the first office, and some sources (predominately popular non-academic websites) credit the first celebration of the feast to the Franciscan order in 1263. In my thesis I prove that not only is the Franciscan attribution incorrect but also, using his own letters, that the feast of the Visitation was instituted on Jenštejn’s initiative. 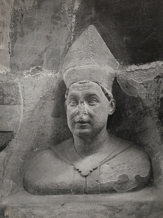 As I continued my research, I noticed that Czech-language scholarship which discusses Jenštejn’s involvement in the new feast is largely ignored by English-language western European research. This was most clear to me when examining Jenštejn’s office, Exurgens autem Maria. In all English-language sources I consulted, Jenštejn’s authorship of his office is noted as fact, however my studies suggested that there may be two composers. It was only when I discovered Augustine Neumann’s ‘Účast Arcibiskupa Jenštejna Na Zavedení Svátku Navštívení P. Marie’ and the manuscript he referenced, PL-WRu I F 777, that I found my first proof of this dual authorship. The manuscript (at least partially written by Jenštejn’s assistant at the Papal Curia, Nicholas of Rakovník) and Neumann’s article explain that Jenštejn’s initial office was a shorter three-lesson office and that, after he was asked by the pope to expand to a full nine-lesson office, Jenštejn gave this job to Rakovník. Once I had Rakovník’s name, I found that many Czech sources – including Pavel Spunar’s Repertorium Auctorum Bohemorum – acknowledge his assistance with Jenštejn’s office. Jana Nechutová, for example, notes that Jan Hus himself stated that Rakovník was an ‘outstanding poet’. (Jana Nechutová, Latinská literatura českého středověku do roku 1400. Prague: Vyšehrad, 2000, p. 225) Neumann’s article was written in 1935, with many later Czech books and articles referring to Rakovník’s involvement, and yet I could find no reference to it in any English-language sources on the Visitation. I hope, therefore, that my thesis brings Czech scholarship on Jenštejn and Rakovník to prominence, and proves the dual authorship of Exurgens autem Maria.

The text and music of the two offices had not previously been examined in great detail. The one already-existing analysis of Jenštejn’s melodies, James Boyd Batts’ thesis, Rhymed Office for the Feast of the Visitation by John of Jenstein, (unpublished Master’s thesis, Houston: Rice University, May 1995) used the manuscript F-CA Impr XVI C4 which, as I discovered when creating my edition, contains Jenštejn’s text set to alternative melodies. Batts concludes that both the text and melody for the office in this manuscript were composed by one person. This conclusion is disputed by the evidence presented in my thesis. Image of Adam Easton (in red), flanked by St Dominic and an unnamed Dominican Saint, in a Venetian manuscript c.1400. Manuscript leaf held at the Metropolitan Museum of Art, bequest of Mrs. A. M. Minturn, 1890.

The text of Easton’s office is given in L. J. Macfarlane’s The Life and Writings of Adam Easton O.S.B., (unpublished PhD thesis, London: University of London, 1955) although not examined in any detail and without the melodies. Other commentaries on Easton’s work focus predominantly on his other theological and defensorial writings such as his Defensorium ecclesiastice potestatis and Defensorium Sanctae Birgitte, although some acknowledge that his Visitation office is a contrafact of Julian of Speyer’s office for St Francis of Assisi, Franciscus vir catholicus. A contrafact is where a new text is set to a pre-existing melody. My thesis was therefore the first analysis of Easton’s melodies, with particular focus on his compositional approach to creating a contrafact office, which revealed something interesting. Nearly all references to Easton’s use of pre-existing melodies merely state that his office was a contrafact in a way that appears to downplay Easton’s compositional work. Deeper analysis and comparison of Easton’s chants to Speyer’s original melodies revealed that many showed a high level of modification – both due to differences in textual structure and for apparent aesthetical reasons. My thesis therefore presents Easton in a new light as a competent, albeit conservative, composer who was sensitive to the melodic approach used by Speyer and wrote new passages in a similar vein. This discovery also highlighted that current terminology regarding the creation of contrafact in liturgical chant is grossly over-simplified, and led me to recommend that Easton’s office should be reclassified as a ‘modified contrafact’. 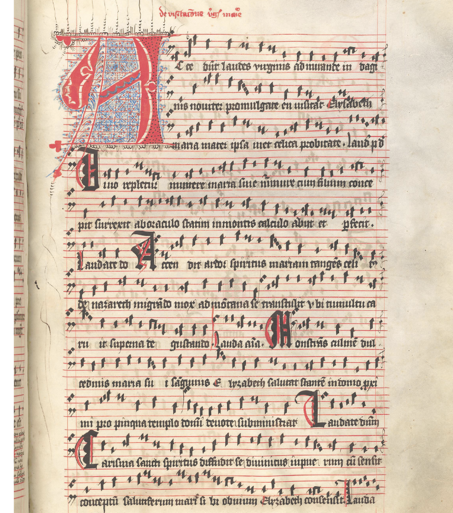 For the thesis I created the first edition of both offices, using one manuscript as the primary source and providing variations in other manuscripts for each chant (ten manuscripts for Jenštejn and nine for Easton) as well as providing an English translation for the texts. An additional twenty-eight manuscripts were used to confirm the geographic and temporal spread of both offices throughout Europe which led to a surprising discovery. Although Easton’s office was officially promulgated by the Papal Curia, Jenštejn’s was clearly in active use in some manuscripts until at least the mid-sixteenth century. The printed book MA Impr. 1537 shows marginalia pointing to the location of a missing antiphon elsewhere in the book, indicating that the Visitation was actively celebrated using Jenštejn’s office in Münster. I also found his office in later text-only breviaries, including the 1771 Breviaire de l’ordre de Cisteaux, suggesting that it was still in use much later in some areas and traditions. (‘La Fête de la Visitation de la Sainte Vierge’, in Breviaire de L’ordre de Cisteaux, avec les Rubriques en François; Imprimé de L’autorité de Monseigneur le Révérendissime Abbét Général. Partie d’été. Paris: Michel Lambert, 1771, pp. 331-338.) The manuscript evidence also shows that Jenštejn’s office was particularly popular throughout Central Europe – Jenštejn observed his feast in Prague as early as 1386, and it may have spread quickly in the surrounding countries before Easton’s office was officially promulgated.

It’s interesting how well, albeit unintentionally, my thesis fits within this project – Old Myths, New Facts. When I began my research, there were a number of ‘myths’ portrayed as established facts by various authors: that Jenštejn was the sole author of his office; that the Franciscans originally instituted the Visitation as a feast in 1263; that Easton was the composer of the first Visitation office; that Easton’s office was merely a simple contrafact; that Jenštejn’s office wasn’t used after Easton’s was officially chosen; etc. In my research I carefully picked these myths apart and revealed the new facts behind the Visitation. In some cases – particularly that of Jenštejn and Rakovník’s collaboration – the truth was known in Czech sources but ignored by West-European scholarship, and this is something I hope my thesis rectifies.
There are many more questions to be asked about the Visitation, particularly of the other six offices composed by 1390 and why Easton’s was chosen above all others. My thesis also raised a number of other wider questions, especially about the prevalence of dual composition and compositional delegation during the late medieval period and the creation of contrafact offices. I am glad to have been able to contribute to the work of the project, and look forward to continuing my research in the team.