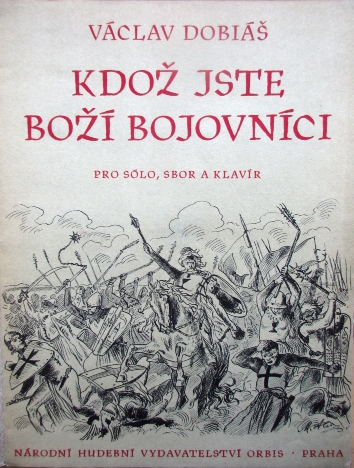 Fields of battles are representations of important milestones in the history of most nations. Immediate associations are evoked not only by names such as Waterloo, Kosovo, Trafalgar, and there analogous key battles in Czech history (e.g. Moravské Pole, Kresčak, Lipany, Domažlice, Vítkov, Bílá Hora, Hradec Králové, Zborov, Dukla).

The Hussite period of history was relatively short and battles were its defining moments. It is therefore not surprising that the positive perception of Hussitism set by Palacký inspired artists to reflect on various kinds of events. Mapping musical depictions created by Czech composers in the past two centuries is among the research goals of our team member Viktor Velek. The result of his research is the first overview of this kind. It is available to readers in two language versions, under the titles Dějiště husitských bitev v české hudbě devatenáctého a dvacátého století and Schauplätze der Hussitensschlachten in der tschechischen Musik des 19. und 20. Jahrhunderts. The study was included in the 14th volume of the Urban Studies series published by the Faculty of Humanities of the Charles University. The publication, edited by Blanka Soukupová, is entitled Naturformatitonen - Stadt - Nation - Identität / Natural Forms - City - Nation - Identity (Prague 2021).

Viktor Velek has conceived the text traditionally, as a chronological overview of the battles and their related compositions. The list of "places of memory" begins with the Battle of Sudoměř and ends with the Battle of Lipany. The text clearly shows the extent of the composers' interest in this or that battle, and the intensity or (dis)continuity of interest. The author has tried to trace even episodic references to battles, and has not avoided works from the field of popular music. Thanks to the survey, the range of forms and approaches chosen is now also known. The study then concludes with a hint of further possible research, i.e. mention of compositions known only indirectly.

The study does not aspire to be a complete enumeration - given the state of the treatment of compositions of Czech musical culture in the 19th and 20th centuries, it is likely that some further works of this kind will be generated by research. However, there is now a basis for assigning and contextualizing them.