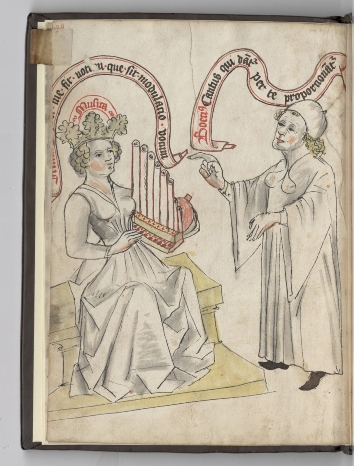 In the next talk of the EMCE series (Early Music in Central Europe: Local Elements –Transregional Connections –International Research), Prof. Elżbieta Witkowska-Zaremba will familiarize us with the rich tradition of music-theoretical treatises in late medieval manuscripts from Central Europe that belong to the so-called Traditio Johannis Hollandrini. The talk will take place on Wednesday November 16th at 5 PM CET via Zoom. The abstract and speaker bio are given below.

To obtain the zoom link for the talk, please register here: https://forms.gle/W8P1zQ4wzVzT6By99

A PDF version of the invitation can be downloaded here.

Johannes Hollandrinus, alongside a number of composers and theorists, belongs to a group of ‘shadowy figures’ who appear on the pages of the history of the music of the Middle Ages. He has been identified, successively, as Johannes Valendrinus, author of the treatise Opusculum monacordale; Johannes Hollandrinus, a scholar working in Prague; and the well-known theorist Johannes Boen. Research carried out over the period 2003–2016 as part of the team project Traditio Johannis Hollandrini revealed him to be the unintentional patron of a widespread didactic tradition, which probably began in the second half of the 14th century and continued to develop until the early decades of the 16th century in the area between the rivers Vistula and Rhine. The extant texts, of which there are more than 30, confirm the presence of this tradition both in city schools and in the university circles, including Prague, Krakow and Leipzig.

My intention is to show the various theoretical-musical and institutional aspects of this tradition that may be linked to the different hypotheses regarding Johannes Hollandrinus’s identity.

Elżbieta Witkowska-Zaremba received her M.A. in musicology and classical philology from the Warsaw University. She was awarded her PhD degree at the Polish Academy of Sciences Institute of Art. During the years 1982–83 she studied at the Centre d'Études Supérieures de Civilisation Médiévale, Université de Poitiers. She obtained a Visiting Fellowship at the University of Exeter (1985) and a research grant from the Herzog August Bibliothek in Wolfenbüttel (1987 and 1989). She received her Dr. Habil. degree in 1991 and ten years later was awarded a Professor degree. She was a director of the Polish Academy of Sciences Institute of Art in Warsaw in the years 2007–2019.