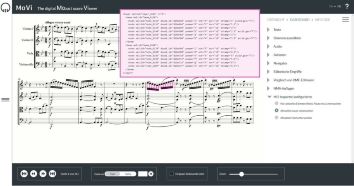 The third session of the 2021 Digital Humanities in Early Music Research workshop series is here, this time organized by the Bohuslav Martinů Institute together with the Old Myths, New Facts project. We would like to wholeheartedly invite you to participate. Given the ongoing pandemic situation, the session will again be held virtually. The workshop will take place via Zoom on September 23rd from 2:15 PM CEST, and September 24th from 10:15 AM CEST.

The possibility of digital editions of musical sources has been discussed in musicology for two decades. As the editor of the Martinů Complete Edition, the Martinů Institute has always been extremely interested in the latest developments in this field. That is why we take the opportunity to let two leading experts in this field have their say and discuss the fascinating topic and the future of digital music editions with them.

The workshop has the following schedule (all times CEST):

The first part (Thursday, 2:15-3:00 PM) would deal with the overall concept of a digital music edition, from the macro perspective, so to speak, or the surface with which the user first comes into contact. In the second part (3:15-4:00 PM) would then go more into the technical aspects and the various coding options that follow the different objectives and functions of an edition. It will provide some illustrative material and web links with which the participants can then gain their own experience. (This could be done in the one-hour break from 4 to 5 PM.) Afterwards we would meet again for a discussion in which we would again discuss some fundamental questions and in which the participants could put questions to us.

The speaker bios are given below.

If you wish to participate, you can register here: https://forms.gle/KafvhsoYuL5RPPoFA
All information is also available in this PDF file.

Andreas Münzmay is professor for musicology at Paderborn University, Germany, and a researcher in the ZenMEM („Zentrum Musik-Edition-Medien“) research centre for eHumanities and in the long-term project „Beethovens Werkstatt. Genetische Textkritik und Digitale Musikedition“ of the Academy of Sciences and Literature, Mainz, as well as in the NFDI4Culture – Consortium for Research Data on Material and Immaterial Cultural Heritage. He holds degrees in musicology, music and French studies. In 2008 he received a PhD from the University of Arts, Berlin, for his thesis on French librettist Eugène Scribe (Musikdramaturgie und Kulturtransfer, publ. Schliengen 2010). He taught musicology in Berlin, Stuttgart, Potsdam, Bayreuth, and Frankfurt and has been working as an editor in the “OPERA – Spektrum des europäischen Musiktheaters” historical-critical hybrid editions series of the Akademie der Wissenschaften Mainz. In addition to his editorial work in the Digital Humanities, he conducts research primarily on music theatre, music in the context of other media, improvisation and jazz. Andreas Münzmay was awarded the Hermann Abert Prize from the German Society for Music Research (GfM) in 2012.

Norbert Dubowy (Ph.D., University of Munich, Germany) was a research fellow at the German Historical Institute in Rome (Istituto storico Germanico di Roma) and taught in various universities in Europe (Regensburg, Heidelberg, Lecce/Italy, Salzburg, Fribourg/ Switzerland) and the United States (U. of Michigan Ann Arbor, U. of Cincinnati). From 2011 to 2014, he worked as editor and editing supervisor at “OPERA – Spektrum des europäischen Musiktheaters in Einzeleditionen” (U. of Bayreuth and Frankfurt). Since September 2014, he is Managing Editor of the Digital Mozart Edition at the Salzburg Mozarteum Foundation, where he and his team developed the Digital Interactive Mozart Edition, an all-digital online edition of Mozart’s music.