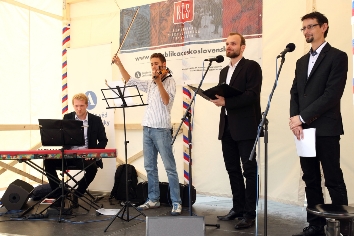 Havlíčku, Havle! – Thus was named a scientific conference organized by the Highlands Museum in Havlíčkův Brod on October 26th and 27th, 2021. Its goal was to present Karel Havlíček Borovský from multiple perspectives at the occasion of his 200th birthday.

The colorful collection of contributions was complemented by a live musical programme prepared by the Old Myths, New Facts team member Viktor Velek and his band "Ostravská bandaska". It was in essence a commented concert: Havlíček was presented as a successful and beloved author of song texts of his time, and in the second half of the concert, his "second life" in the music of the 19th, 20th and 21st centuries was reflected.

The performance is available here: https://www.youtube.com/watch?v=F1yNooTn-zI&t=2823s

More on the performance from Viktor Velek himself:

"This was the first time we performed a programme on Havlíček, and I hope it is not the last time! Havlíček's relationship to music is often seen quite superficially and schematically. We wanted to make this apparent through a live performance of the songs for which Havlíček provided texts. For most participants, this was the first time that they could hear what has previously only been known in writing. We purposefully included also texts that used elements of Hus and hussitism. It is necessary to remind oneself that this topic has not missed Havlíček; quite to the contrary, his interest in hussite themes is illustrated by many 'tinies'."

A few samples of these "tinies" (transl. from Czech by Jan Hajič):

Sword and chalice (epigram, Feb 25, 1844)
Why were hussite wars?
They were meant to settle whether
one should serve Christ’s body either
with or without sauce.

Apology of Taborites (epigram, Mar 14, 1844)
Well did Žižka examine, ere the sword he brandished,
both faiths with an eye of judgment untarnished:
with his right — the chalice,
the catholic — with his left.

Political (epigram, Feb 26, 1844)
Pray, you Czech,
to St. Vojtěch
so the guild of independent nations
you would accept.

Mixed Poem of the Religious Kind
Brother Czech, throw down the black!
The black did Roman murderers wear
who in Constanze at the stake Hus burned.
Brother Czech! Trample the white!
The white did Jesovites wear
who our glory to ash burned.